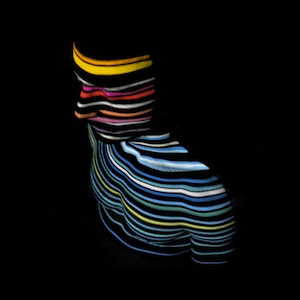 Just like people, bands like to celebrate anniversaries. But differently from them, bands are keen on re-mastering albums, best of and other juicy releases, such as, for example, Aucan’s Black Rainbow Remixes, descended from Black Rainbow, that came out one year ago. If we move backwards we’ll notice that at that time Aucan were not that famous, known especially in the math rock and electronic scene. Luckily enough the hype made its job, and the band supported bands such as Placebo and Steve Aoki, and Black Rainbow introduced themselves as a new wave of electronic music both in Italy and abroad.

The best way to celebrate their first anniversary is a compilation of remixes by them and other artists such as Skyrider, Shigeto and Cecile. This album is the medium through which the band starts experimenting with genres like rap, ambient, dubstep and hip-hop, getting even more internationally diverse. The band work on two tracks personally, creating a sharp and syncopated sound, like the rap exposure of Storm (ft. Dalek) or the most energetic Away! (ft. Spex). The tracks swing between dubstep (SPL) and ambient (Embarque), proving that this adaptation is a next step in getting a new vibe to Aucan’s sound. The only tracks that do not seem to work are Red Minoga and Blurred, who really do not stand out or improve somehow the features already in the songs. Whatever your opinion about electro music may be, you cannot deny that this compilation of remixes is the proof that this band is not afraid to broaden its boundaries.

Giulia – A Part of Me: il videoclip in anteprima esclusiva