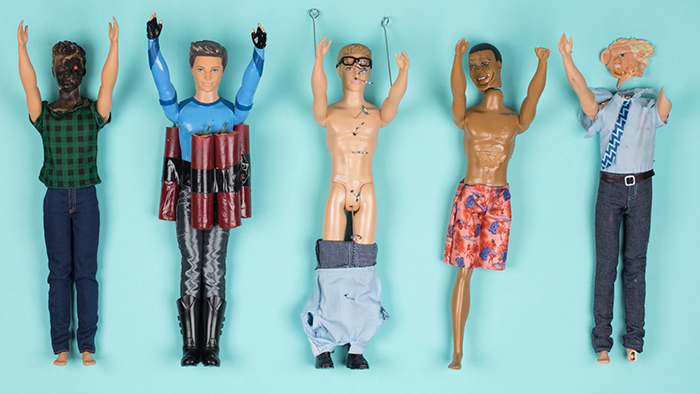 Schall & Schnabel is a multidisciplinary study founded by Eileen Huhn and Pierre Horn. They’ve worked in the last five years for important brands, fashion magazines, musicians and art galleries. Schall & Schnabel balance their work between commercial products and contexts close to contemporary art, without ever abdicating their creative philosophy, fueled by endless research into matter and digital, vision and pictorial influences.
For this reason and in addition to the invention of a bizarre and funny pop world, their videoclip stimulate a realistic and disturbing dimension directed at the spectator’s active consciousness, within the abstract frame.

After the view of one of their finest works, the Boyfriend video made for Confidence Man, we thought about interviewing them to let our readers know the creative journey of one of the most original couple in the field of visual arts.

First of all, congratulations for your work on Boyfriend Video, is an amazing work of art. For a while i’ve thought about an angry version of Todd Haynes’ Superstar. Is a possible influence?

First of all – Thank you!
To be honest: we’ve never heard of the movie before. We just had a look on it and it would have been great to name such a sophisticated influence, but we only realised a reference to Soundgardens Black Hole Sun after the video was finished, sadly because around that time Chris Cornell died.

The Idea to use Ken Dolls was yours? How you’ve discussed it with Confidence Man?

We were talking about several ideas for the video, most of them with a more sexual undertone, when we suddenly had that specific idea, but it was one out of four possible concepts. Astonished that the band and the label choosed this one, we created a long list with many possibilities how to crush, melt, and destroy Ken dolls, so that they could sort out which of the massacre methods might be too brutal or be endangered to provoke some sort of censorship. But they told us to capture some nasty, provocative stuff and put their full trust and support in us, so there was no real discussion about it.

To chop, burn, dismember, kill an Alpha-male icon is a sort of feminist statement?

Manslaughter or in this case: Alpha Male Doll Slaughter isn’t really a feminist statement, or is it?
It wasn’t in our intention to get a bold feminist statement out there. We simply wanted it to be on point, funny and underlining the lyrics of the song. But you can interpret it like this, if you want.

What is really very, very interesting in the video are the objects. All Household items, for household works, i suppose is a deliberate choice…why?

We were thinking about also working with a hydraulic press or liquid nitrogen. The only item that can’t be easily purchased in a Household Store is the laser in the end of the video. But we just chose these all the items to make it look very playful and although it sets place in a pop coloured, super-artificial set, we wanted to look realistic.

I like very much the background and the set and the way the background colours change with the objects. Is a pop, optical phantasy. Optical art is an inspiration for your work, for this one and in general?

Although there are recurring optical art elements, like the kaleidoscope, prisms and geometrical refractions, we are not that into Optical Art, to be honest. This video is mostly inspired by a high end advertisement look, a plastic nightmare and Pop Art Still Photography. It ought to be look like a girlish phantasy.

This is the most physical of your music videos that are very often experiment on frames re-framed, refractions, screens. The matter is more important now? is a new direction?

Well, we think aesthetics should be always adjusted to the concept and serve the content of a piece. So, we are still heavily into experimenting with layers, refractions, analogue and digital techniques and mixing different materials, but we’re only using the outcome, if it fits.

The matter appear also in “Miss you” for James Hersey, especially at the end, like colours painting that melt and invade the frame. Is an interesting approach, near to video painting. What do you think and how is important painting  in your works?

It used to be more important to us, as we started out as photographers. Paintings influenced our interest in light settings and distorting techniques. In case of the »Miss You« video we wanted to work with a metaphor of the impossibility to paint an exact picture of the one you’re longing for. Love runs through your hands like spilled paint. Also this analogue look on top of a digital moving image was appealing to us.

You prefer matter or vision? The eye or the body?

We prefer vision. We prefer the eye over the body, but we always have to experience matter as an impact on vision. Some of our works are obtained by starting to experiment with different materials or methods. Sometimes it’s an interplay between a vague idea and the uncertainty wether your results will lead to anything or not.

The matter also is at the core of the video installation “i need a break from shining”. All is melted, like wax. Plastic, body, organic, inorganic and digital space. The feeling i experience is near to the loss of our body perception in a trans-medial society, is that correct?

This is a pretty accurate description of the installation, yes! Our main fictional character Ovid is breaking the fourth wall and talking directly to the viewer about his self perception, his day (in a fictional “Vlog” post), interrupted by digital disruptions, a tutorial on how to get rid of the others within your computer screen and aligned by alienated voices and texts. He is dissolving in a visual meditation, melting and composed again, reflecting his self perception and the perception of him by others. Together with Lucas Gutierrez, an audio visual artist, and Darwin Stapel, our main actor, we created the concept for the installation, which is a reflection on the current status quo of human interactions (in the digital age).

I need a break from shining, video by Schall & Schnabel

Light. It seems another important element in your videos. The ones made for Sarah P are phantasies of light. How you work on set with real light and bodies and how you interact in post production to alter the unity of vision?

We experiment a lot with projections and specific objects that we create and develop furthermore in order to distort images and videos. This is going on for a while now and we seem to not loose interest in creating this. Post production is a way to exaggerate the experiment even more.

Again optical art- the historical one and the psychedelic experiment on image, you’re influenced from the sixties?

Not really. We are influenced by different artists from various directions. James Turrell or Olafur Eliasson and their works on light and optical objects. Or video artists like Andrew Thomas Huang and Jonathan Glazer. And, of course, Wes Anderson.

Again objects. The Schwung & Schleife. Can you tell us about the idea behind the serial videos? In a way is very similar to the treatment you deserve to Household objects in Boyfriend video.

Schwung & Schleife (this could be translated as “Momentum & Loop”) is a GIF series of simple surrealistic miniatures, which are accompanied by short poetic texts (in German). The idea was to create something that sets a narrative into the restricted settings of a Graphics Interchange Format and runs in a loop. It is more a result of our first stop motion music video for Delta Q that we created two years ago

“Everyone’s talking” for James Hersey is an incredible and amazing portrait of digital society. Our ability to interact with frames and screens and the inability to communicate properly. Can you talk about this video and the artistic idea behind it?

What do you think about music video of today? What is interesting for you and what is not interesting in the nowadays video market?

Although it lacks of impact, if you compare it to the nineties, when music television was still a thing, the music video as a format is still a mesmerising short form that allows creators to enjoy a certain freedom. Not really interesting are those kind of music videos that you seem to have watched a million times, because their structure, plot or poses recur to visual stereotypes. But if the directors, producers and artists are given the chance to innovate and create without any restrictions regarding the market value of the music, great music videos can be created. We enjoy music videos, based on funny or intelligent concepts and we have weakness for 3d animation videos.

Can you talk about your study and your first approach to your work, and then the first time you’ve thought about the Schall & Schnabel “concept”?

Eileen studied Visual Design at the University of Applied Sciences and Economics in Berlin and her graduation work already had a conceptual approach. Pierre studied philosophy and literature. Maybe this mixture of different backgrounds led to the specific focus on visual concepts. We started out working as photographers five years ago for magazines and brands, mostly in fashion. But we have always regarded to Schall & Schnabel as a label that allows us to carry out visual research work and trying out various techniques. Most of the time we are interchanging between commercial and artistic works. Whenever we have some time to spare in between jobs, we are seeking for new impulses and ways to develop our ideas.

Project and goals for the future in music video field?

Currently we are working on the second music video for Confidence Man. It’ll be published in late September / October probably and it’s going to be weird and funny again. After that we would like to continue working on installations and videos with a darker approach. But let’s see.

Thank you for the interview!