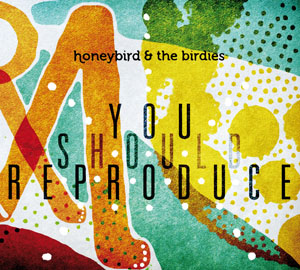 Some albums have interesting origins, some other have extraordinarily weird ones: how many of them, for instance, begin with a visit to the gynecologist? When the Honeybird & the Birdies frontwoman Monique “honeybird” Mizrahi went for her routine visit, her doctor told her that “You should reproduce!”, and from here the title You should Reproduce came about.

However, the story gets even better. Monique, with her bandmates Paola “p-birdie” Mirabella (drums, percussion, vocals) and Federico “walkietalkiebird” Camici (bass), proceeded to use Kickstarter to secure funding for the recordings, collecting over $7000 from 150 backers and becoming the first band in Italy to use this service successfully.

Moreover with the oddity, the album’s song structures are based on the sound and playing techniques of the charango, which Monique learnt to play during her travels through Latin America and which was used to compose most of the songs on the album. As a result, the sound itself is multifarious and polyphonic, as the fragmented in tribal and playful tunes can prove (To the Earth’s Core).  Brazil’s tropicalia mixes with electric distortions, in a reborn punk attitude (Elastic Stares), getting a touch of anti-folk thanks to a minimal and acoustic approach (Swimming Underwater, Canopy Dream) that progressively becomes a pastoral dream (Caraffari). Celtic punk with Las Kellies-y vibe (East Village) and unconventional rap (where d’ya live you?) makes this gyro even more explosive, leaving us with a pastiche of the whole album, and the psychedelic conclusion of You Should Reproduce.

The lyrics themselves are pure wordplay and punning, with the use of different languages and dialects, mixing for example English, Italian, Sicilian dialect and German (Eine kalte Geschichte). However, the themes themselves are far from accidental, as we can hear about Edmund Halley’s Hollow Earth theory from 1692 and the Malaysian “Mak Yong” dance banned by the Islamic government in 1991 (To the Earth’s Core) or the genocides towards Armenians in the Ottoman Empire in 1915-16 and the more recent ones towards Buddhists in Cambodia (Perejil).

As we can see, You Should Reproduce comes from a everyday event, and expands into different voices, situations and realities. In its tiny universe Honeybird & the Birdies express the most vibrant and assorted collection of references and sounds, in a colorful landscape that will stick in the listener’s memory.

Honeybird & the birdies on the web