14 Luglio 2015
Abyss, a conversation with Chelsea Wolfe: Everything I do is cyclical 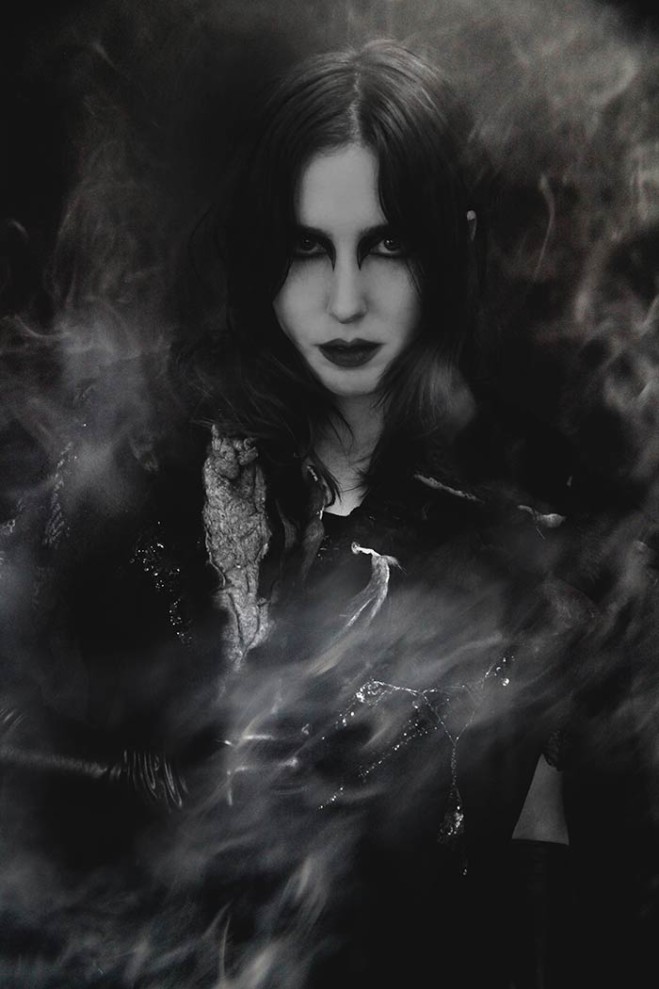 Down into the chasm and seeking freedom, Chelsea Wolfe talks with Indie-eye about her forthcoming album: "Abyss"

The first time we interviewed Chelsea Wolfe was in 2011, through this connective video podcast released when the American musician published her second album in terms of officiality but the first one she composed in order of time. About The Grime and the Glow, Wolfe told us a lot about her beginnings, her musical and cultural roots, a sort of foundation of the path that led her to the present, to the realization of the forthcoming “Abyss”, album due out August, 7 for the LA label Sargent House.

As we explored during a second interview with Chelsea Wolfe for Unknown Rooms, and later with a review about Pain is Beauty, the strength of her syncretic music manifested itself not only in terms of sound and narrative research but also in the form of a creative practice that broke all the schematic categories that are usually used in critical terms to streamline a process of evolution.

Chelsea Wolfe was born as a “viral” artist in the deepest sense of the term, exploiting the horizontal potential of the Internet network , re-inventing a narrative mythology through her discography and with the combination of elements that were co-existing and in apparent contrast from the beginning.

In this sense Abyss does not betray the expectations, along a journey that disrupts any binary opposition (Extreme/meditative; mundane/interior; dark/light) bringing forward some intuitions contained in “Pain is beauty” in an inclusive way.

From a certain point of view, the first thing you notice is the industrial/noise/doom surface of the whole album as it were an impenetrable metallic sculpture, but with some other embedded elements, such as folk, electronica as a way to explore an interior landscape and at the same time the tendency to free sound in an acousmatic dimension: if you pay attention to the visual/musical layering in “Carrion Flowers” song/video you’ll find traces of a painful elegy and at the same time the image of a technologized natural landscape, an unspeakable “punctum” between human presence and spiritual tension.

Chelsea Wolfe, as she told us in this conversation, works with an idea of time that goes beyond the common idea of temporality and the abyss is not always what it seems; there are many interpretations that flow, from the unconscious to a condition that exceeds it, in order to privilege a cosmic perception.

At the same time, the observation of sufferance has not an end in itself, but keeps an eye focused on reality. This was the case for the love story in Sunstorm, and in Iron moon where the death of Xu Lizhi, a Chinese worker in Shenzen, became an inspiration to reflect about hell on earth and the possibility to find freedom beyond socio-economic utopias; so as the incongruous landscapes described by Wolfe, are revealed as a wound that hurts a violated wilderness.

The Unconscious, from the reading of Carl Gustav Jung’s Memories, dreams, reflections is therefore one of the many items from which Wolfe started to write the songs for Abyss; as a Lynchian “inland empire”, it is a “realistic” cognitive dimension that is like a “desire for a specific place that you resonate with and how so many of us are displaced in different ways “. So, as Wolfe told us about Flatlands as a poet of dispossession, looking for a gesture of love beyond the real-virtual urban life, now is telling us about it with Abyss, down into the chasm and seeking freedom. 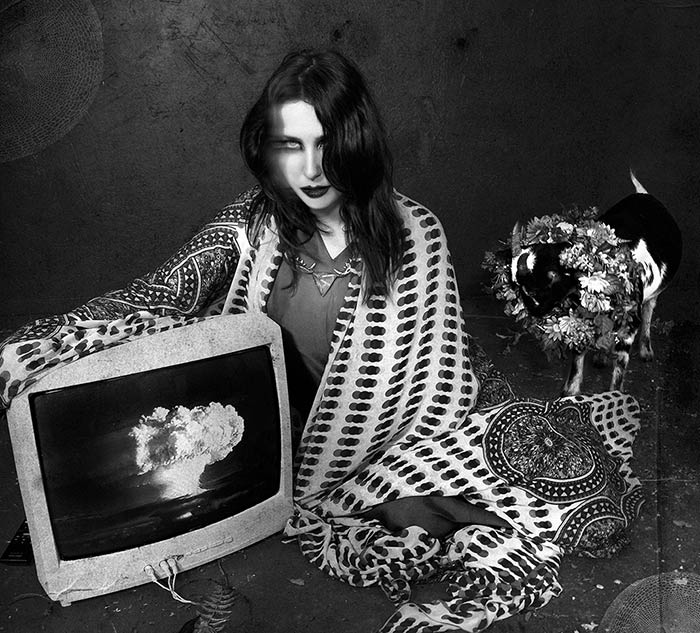 Hi Chelsea, we’re happy to have you here again on indie-eye. Before starting to talk about your new album I’d like to know something about your brand new video, Carrion Flowers. It is Wonderful and I’ve read that you’ve realized it yourself with the help of Ben Chisholm. In which location have you filmed it? Can you tell us something about the work on it?

Thank you for having me. The “Carrion Flowers” video came really naturally. Where I was living while writing Abyss was in the mountains where all of the water is piped into Los Angeles, but nearby the lakes are drying up and it’s a place with constant forest fires. There’s a big contrast there, a lot of great-looking industrial stuff set amongst the green mountains.

Who has created the Grattage effect on your eyes and your body? It reminds me the final scene in Olivier Assayas’ “Irma Vep”. Did you take your inspiration from that movie?

Yes, I was inspired by Irma Vep and old Andy Warhol screen tests for that aspect.. I loved that scribbled, frantic look, I felt like it represented some crazy energy that I related with so we channeled it into our own version. Ben did the editing and directed it with me.

Who has taken the photos and created the artwork of your album? It is a wonderful shot, something that recalls paranormal photos, like “spirit photography” by William Hope…

The cover and back cover were painted by artist Henrik Uldalen, he’s wonderful, so talented at quite a young age and I believe self-taught. He had reached out to me a year prior, but his work really resonated with the songs I was writing for Abyss, so it was finally the right time for us to work together and I’m grateful he agreed. The inside photo of the windows was taken as my friend D.H. Phillips from the band True Widow was showing us around the new warehouse space he and some others are converting into a practice space and art studio. You can see the silhouettes of his and Ben’s heads if you look closely.

I’ve read that Abyss is a sort of trip inside one self’s dreams and subconscious, can you tell us something about the ideas and inspiration that is behind your new work?

Well I was inspired by many things.. one subject that came up a couple times was suicide – a story I read about a Chinese FoxConn worker who wrote stunning poems.. he took his own life because he couldn’t handle the monotony of factory life and feeling stuck.. that inspired the lyrics for “Iron Moon” but I also expanded on this idea, imagining him in the dark, dorm-style rooms, feeling like the walls were closing in, and trying to envision him finally leaving that place in his own way, but I was envisioning him dancing through the factory lines, throwing his uniform in the air, dancing with abandon. I’m always translating fucked-up stories into something that could possibly be more triumphant or hopeful. But sometimes I also give up on that, as total despair is also a reality for some and I always try to reflect some reality in my music.

The particular mix between doom metal, noise, dark and electronica is stronger than in the past. Abyss is your most powerful and hard work to date. Why did you choose to expand this side of your music?

I think it sprung from a desire to have songs that would translate well live and be fun to play live.. heavy songs. We’ve been touring so much and will keep touring, so it was the first time I kept that in mind while writing an album

Folk music is still present, but in a different way, as if it were distorted through a glass; what do you think about it?

Yes, I agree. It’s about storytelling, and my viewpoint is often slightly distorted

In which ways, exploring subconscious states has influenced the writing process? Have you written your songs in a state of trance? As a listener, the quality that your songs suggest, is a sort of suspended time, an inland empire without entrance and without exit…

I think you summed it up. I don’t actively write in a trance-state, but I prefer to, and it often happens naturally

Could Abyss be imagined like a trip? Does it have an end or is it cyclical like the cycle of nature

Everything I do is cyclical, and out of the normal sense of time

Can you tell us something about the line-up of the album and the work with John Congleton on your sound; how was your collaboration with him?

I desired to make an album that felt intimate and raw while still being heavy, and I think that the group of musicians mixed with John’s particular style was really a harmonious match 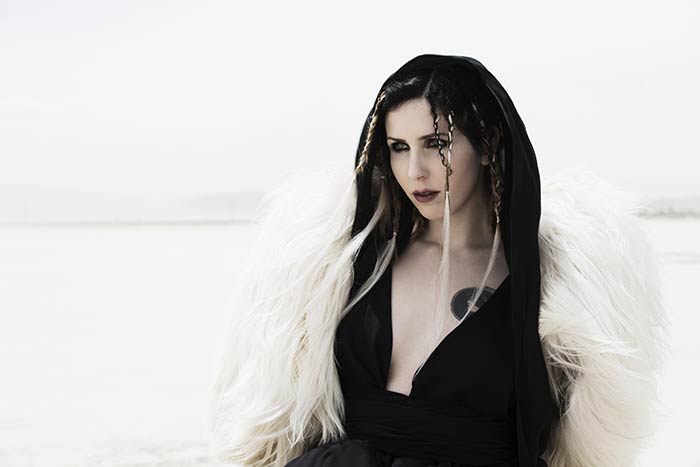 In the press notes you talk about the idea of imperfection expressed by Yohji Yamamoto. How was his art important for you, from visual to sound experience?

I am a big fan of his work, and I resonate with a lot of what he’s described his outlook and approach to art to be

And what about Carl Gustav Jung?

I was reading his book Memories, Dreams, Reflections and came upon a particular dream he described with the first line, “I let myself drop” – that line stood out to me in a very visual way and was sort of the catalyst for me to start having writing sessions where I allowed myself to drop into my own mind and confront things there that I hadn’t before or had suppressed for a long time. It resulted in some intense emotions and honesty that I was able to channel into the new songs

In “Grey Days” there’s a sound, like a pan flute that reminds me middle eastern traditions, while the drumming has almost a war and military rhythm. Are Grey Days hell on earth?

Grey Days are many different things. They are something that is holding you back, internal or external. And maybe you even have an attachment to it, like a drug, but it is unhealthy for you and you want to move on from it and you’re fighting onward. There’s an intention of movement in the sound of the song.. I’m intrigued by forward-motion: running, trains on the track, planes taking off. There is a sample of a plane taking off in the song “After the Fall” 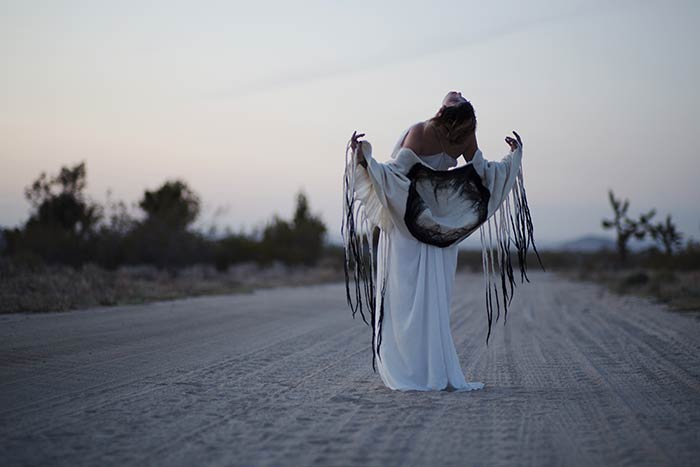 After the fall is one of my favourite tracks on the album and it has a central role; musically and I also suppose thematically. Can you tell us something about this song?

For me it’s the most simple song lyrically.. it’s a simple love song set in a dystopian world or landscape. It’s about being trapped inside of a dream or a situation and trying to find your way back to the one you love

The title track is the most atonal and abstract track on the album and with an expressionistic coda. Is the Abyss something that you can’t describe with descriptive language?

The abyss is something that’s explored in a few different ways on the album. The word itself and its definition were inspiring to me – an abyss can be an endless space, primal chaos before creation, a vast chasm. I think of it as internal and external – the universe as an infinite abyss. That last song on the album is a song I wrote to remind myself not to totally give into the darkness I was exploring inside of my own head

How will you bring these new songs on the stage?

Will be in Italy soon for a live?

Thanks to laura sieni for her precious help 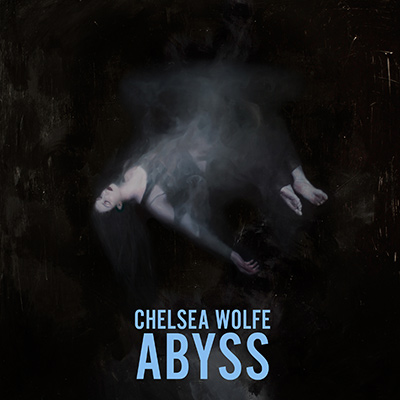 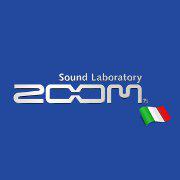 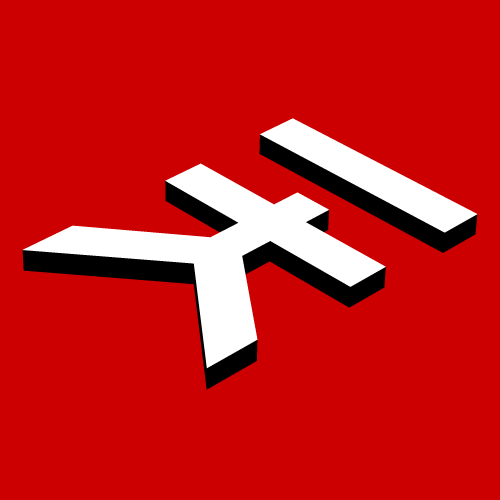