Jane Weaver: A Modern Kosmology: the mistery inside our heart, the interview

Jane Weaver is an amazing musician who has been active for at least twenty years. With Kill Laura and the subsequent Misty Dixon she crossed psychedelic, shoegaze and pop sound, re-reading the Stereolab lesson, especially in the shared experience with David Tyack.

In her solo adventure she continued on this path, repeatedly evoking the spirit of British female folk songstress of the mid-sixties, without avoiding the passion for German analogue-electronic music from the seventies, which from Misty Dixon characterized the most experimental and free-form side in her music.

Gong and Hawkwind’s space rock is channeled and elaborated through the synth-pop of the eighties and folded to a songtelling very close to the fairy tale of the popular culture.
Magic, esoterism, revelation, contact with natural energies, and an arcane reality made up of symbols and codes are at the center of her creative universe.
After six solo albums, mostly released for her personal label Bird Records, Jane Weaver in 2014 comes out with Fire Records, making “The Silver Globe” an enigmatic record inspired by a movie directed by polish director Andrzej Żuławski. The album synthesized years of experience and advance the results of “Modern Kosmology” her most recent work, published again by Fire Records.

In this long conversation we asked Jane Weaver to tell us the secrets of her wonderful work, written with the Angelsey Island as a natural landscape and partly inspired by the abstract and mysterious art of Hilma af Klint

[The photos of the article are by Rebecca Lupton]

Your 2014 album, The Silver Globe, was inspired by a film by the great Polish director Andrzej Żuławski. Last year Żuławski died and left us his last masterpiece, “Cosmos.” Does modern Kosmology have something in common with that kind of esoteric vision?

I didn’t know about this film until recently, it’s pure coincidence but I am now eager to see it, he had a great vision, ‘on the silver globe’ is perhaps one of the most striking and unusual films I’ve ever seen, it’s also quite disturbing in places!

What does “Modern Kosmology” mean for you?

Cosmology is the study of the history of the universe, ‘Modern Kosmology’ is the concept of the history of your own universe and how you can look at all the things around you in your life, your experience on earth and do something good for other human beings.

“Modern Kosmology” has something in common with “The Silver Globe” but it seems to me to go further. It’s familiar, and at the same time, new. Do you agree?

Yes, I am still attracted to the cosmos but I feel the new album is a bit less ‘spacey’ audio wise and in production, I wanted the voice and words to be louder and some of the parts clearer, I didn’t just want to do what I normally do and put space echo on everything!

Why is it so important for you to put together folk and electronic music, digital and organic sounds?

I started using more electronics when I was in a band called ‘Misty Dixon’ a long time ago, we used some programming and organs with acoustic guitars. You could hear the instrumentation clearly, I like organic sounds to be good at source then I like using tape echo physically rather than a plug-in.
I’m not against plug-ins at all and use them, but when it comes to electronics and digital I prefer machinery thats easy to operate and has buttons and faders, in the studio I use a lot of analogue stuff that’s relatively uncomplicated, so in fact I use old and new methods, I never limit myself and like to try out new things. 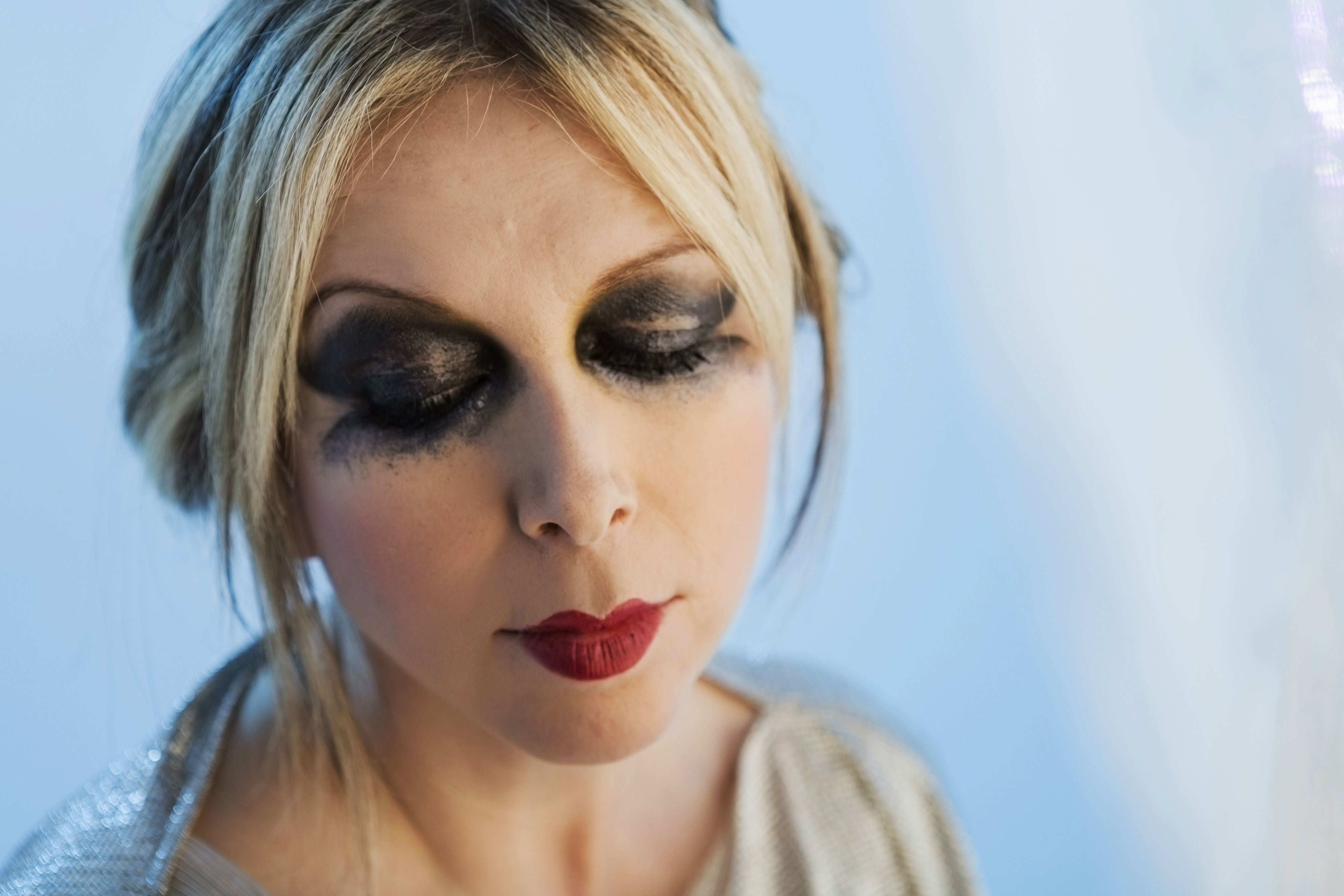 It therefore seems that this combination of roots and technology, pop and free form creates a strange place, accessible and full of mystery at the same time, as an esoteric pathway where the invisible lies within the visible. Both from the point of view of the lyrics but also the music and the sounds ….

I like to visualise the song as a picture, for each song there is a place I go to. I like recalling a scene from a film, it’s a combination of places that exist and imaginary. It’s just little vignettes of daydreams but with a soundtrack. I think modern pop music is so exciting , the sound picture is so expansive and everything is powerful, some noises you can create now are really unusual, it’s like artists are projecting into the future faster and faster.

Is your collaboration with CAN’s Malcolm Mooney a bridge between past, present and future?

Malcolm is a friend and someone I greatly admire, he’s an artist and also has a wonderful voice, of course everything he did with CAN is great and to have his voice on the album is an honour, I had an idea of doing a crazy jam and spoken word, I could hear a commanding voice like the voice of the gods foretelling the future!

When I first heard synth pop as a child it was groups like, The Human League, Ultravox, Gary Numan and Jean Michel Jarre great pop songs using keyboards, I got a Bontempi organ when I was little and used to try and recreate pop songs from in front of the tv, it was easy to play along to I guess. Everything on TV at that time always featured lots of science fiction programmes and there was also symphonic rock combining orchestrated music with electronics!
I think these electronic sounds have always captivated me because they are so dreamy and expansive, they sound futuristic and other worldly. I’ve great admiration for innovative artists like Suzanne Ciani, she would create sound waves and noises with her Buchla , stuff for TV advertising and pin ball machines some of her ‘wave’ stuff is really beautiful.

Your folk side looks very close to the female one born in the mid-sixties, the folk who put the female identity in the center. Is it an important source for you, musically, spiritually and politically?

Yes, I’ve always been attracted to the female voice of that era, the emotion and the connection of it, I used to listen to Joni Mitchell a lot when I was younger, her melodies are so expansive then I got into more english traditional folk like Anne Briggs and Pentangle, then more unusual music from overseas. I like simple stuff like Sibylle Baier, just a voice and a guitar.

You’ve written part of your album on Angelsey Island. Can you tell us the choice of this location and whether there is a particular, historical or mystical reason?

It’s a place I used to visit as a child, it’s quite a magical place there is lots of druid history and stone circles, I wanted to be on an island surrounded by the energy of the sea, that’s the location I could see in my head regarding some of the songs. We had recently played a gig on the Isle of Eigg which is an Island of the North West Coast of Scotland, not many people live on the island and so its very unique and you feel at one with nature and the elements. I was walking there on my own and it was so quiet apart apart from the Sea crashing at the rocks below, it was quite a dramatic sensation. 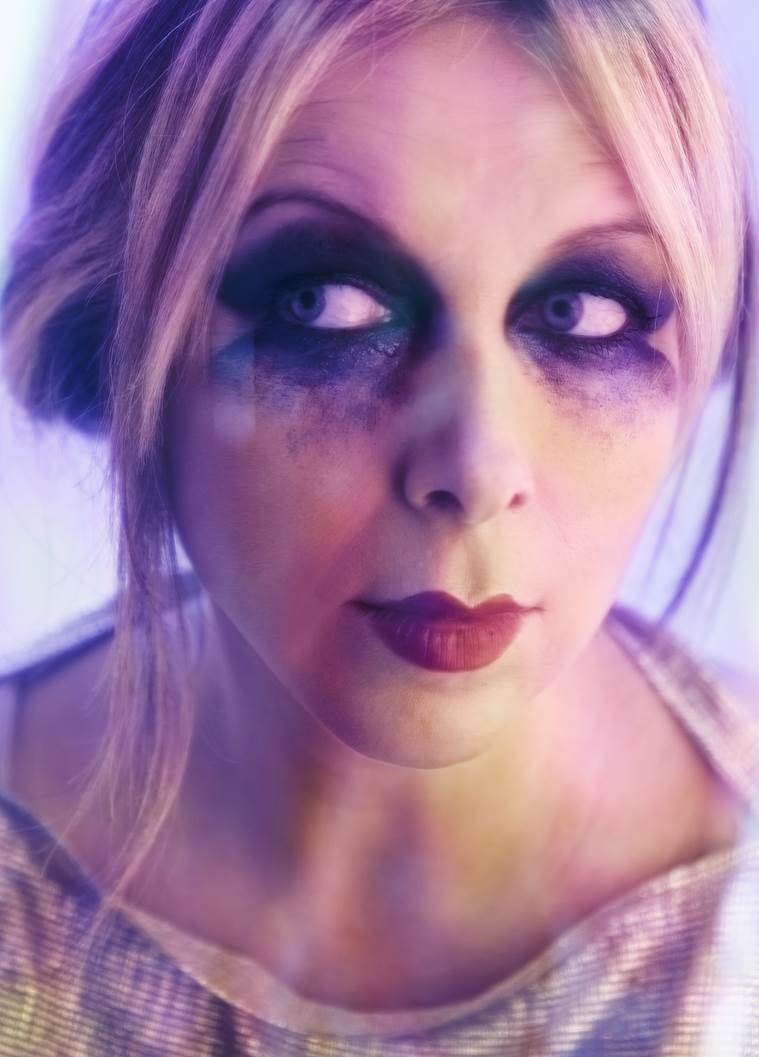 So there was a need to establish a contact with the island’s purest tradition, the one related to the Menai massacre?

I have always felt a spiritual connection with Anglesey, I knew that it was once inhabited by druids but didn’t realise the extent and brutality of the Roman invasion, we look at this and see how pointless it is to wipe out religions and groups of people because they are different and yet this was 57AD, atrocities in the world and people being killed because of their beliefs happens today, every single day, I cannot believe that some things have not progressed in over 2000 years, it’s so devastating and wrong.

The geometric motif of “Moden Kosmology” reproduced in the artwork of your album recalls Wassily Kandinsky, Piet Mondrian and Kazimir Malevich, but before them the art of Hilma af Klint. Is it an important reference for you?

The artwork was designed by my husband Andy Votel, you would have to ask him about his entire concept but for me as the artist I love that its type based and geometric but embodied in a graphic as if its a secret code in the centre of a jewel, so for me it is in keeping with the sound and words of the record. The attraction with Hilma alongside her amazing art is her story, the process and lengths she went to in order for her to produce her paintings, the codes within her work the fact she used seances to channel energy, and the fact it was within a secret society of other female artists is attractive to me too.

Are the images an important inspiration for your music? Paintings, abstract shapes, nature or cinema?

Definitely, when finding inspiration it’s good to look at other forms of creativity and other peoples worlds and imaginations, I was struggling to find inspiration when I started this record then I visited the Tate Gallery in Liverpool, they had an exhibition of feminist avant garde art so I was lucky enough to see some of Lynn Hershmann Leesons early work including ‘Roberta Breitmore’ which is a favourite, so I started looking more down different avenues of inspiration, I knew Hilma af Klints artwork involving nature and geometry but her story to me is just as interesting. Of course cinema is important to me, directors as artists, how lucky we are to see and hear other peoples visions, like when I saw Fellini’s ‘Juliet of the spirits’ for the first time the impact of the inspiration of this will stay with me forever.

Even though defining the inspiration is very complex, I would like to ask you this question: how do you combine your visionary world with the writing processes? Is this a state of trance or meditation that then transforms into a song or involve a more specific practice?

Sometimes I hear full songs quite clearly and see them as pictures, then you have to translate your ideas to a real thing, sometimes frustrating as the soundscape in your head is much bigger and sonically like an orchestra. I don’t usually finish all my words until the music is all tracked and ready to be mixed, it’s like a continuous process of working. I like to spend a lot of time listening to what I’ve tracked, it’s important because I always do too much so have to remove some parts, to finish all the words and get them in to shape I go away alone to somewhere quiet for a few days so I can think straight and theres no distractions, I can’t rest until I know it’s right and finished it becomes like a bubble you live in.

How do you bring the sounds of “Modern Kosmology” on stage? Tell us something about your live band …

It’s important to me to make it sound as much like the record as we can, on the record I play all of the synths but it’s impossible for me to do this live so we have a synth player, and I play some stuff too although, I like to concentrate on singing and performing, the musicians are the band I’ve had for the past few years so they play various parts on the album, they’re a good bunch, great musicians and good to hang around with! Visually I’m working with a friend who is creating a video backdrop for us, he’s quite cosmic so we like to use this when we can too.